The books smell old. Most are bound with string because the original bindings are unreliable. More often than not, turning a page causes it to come loose in the reader’s hand. For the most part, their text is handwritten—using old-fashioned steel-tipped “dip” pens—in the sort of beautiful, flowing penmanship that most of us admire but seldom achieve. One looks through the books in vain for cross-outs and erasures, but those are nearly as rare as they would be in a medieval illuminated manuscript. These were serious people; they regarded the minutes of a meeting as a work of art, and they worked at it slowly and deliberately.

At first glance, the words of their early accounts make it clear that the organization they formed was very different from the one we have today.

For a year or two a number of superintendents and teachers of the schools, in the cities and towns of which Cleveland is the commercial centre, had been accustomed to meet frequently and exchange views on questions pertaining to their special work. These informal meetings were felt to be profitable to those engaging in them. The opinion was generally entertained that there was professional interest among the teachers to warrant an organization which should hold meetings at stated times, thus securing agreement as to time of meeting and questions to be considered. Accordingly, on Saturday, November 13, 1869, a few gentlemen met in one of the rooms of the Weddell House, and there organized the North-Eastern Ohio Teachers’ Association.

They were all men. They were “superintendents and teachers,” but most of their leaders were superintendents. Some of their names, and those of their successors, have been borne by schools throughout northeastern Ohio: Thomas W. Harvey, Painesville; W. H Kirk, East Cleveland; H. B. Turner, Warren. 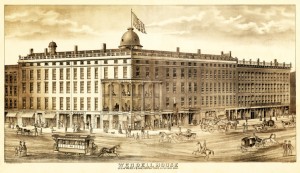 They knew where to hold a meeting. The Weddell House had been built in 1847 at the corner of Superior Avenue and Bank Street (now West 6th Street), and it was described as “the best hotel west of the Alleghenies.” Abraham Lincoln and Jenny Lind had stayed

They knew whom to invite. The superintendent of schools of Washington, DC, was present (the record doesn’t say whether he came for this meeting or was just passing through), and they invited him to participate. The State Commissioner of Common Schools was present to present a report on “The Condition of the Public Schools of Ohio.”

“An earnest desire for combined and vigorous effort in educational work; an honest purpose to secure improvement in methods of instruction, in classification, and in the details of school management, called it into existence.”

They had concerns about the quality of instruction in rural schools and the preparation of the teachers they were employing.

“President Harvey called attention to the importance of considering such questions as, I. The improvement of our country schools. II. A uniform classification of our town and city schools. III. A Course of Study arranged with reference to the classification. IV. Practical and disciplinary studies. V. New Methods of instruction; and VI. Moral and religious instruction.”

They had no doubt that they knew what teachers needed: they adopted a constitution which said that . . .

“the object of this Association shall be the professional improvement of its members, the advancement, in true educational progress, of the schools of this section of the State, and the dissemination of correct educational ideas.”

They might have shuddered to know that their organization would eventually empower actual classroom teachers. Their first official action was to pass a resolution in which they congratulated themselves on effective administration: “It is believed that the progress of the schools in our cities and towns is largely due to intelligent supervision.” And, of course, since they conceived of the organization as a “teachers’ association,” they would probably be astonished to learn that it would eventually include nonteaching employees as well.

Before the evening had ended, they had elected an executive committee of seven members, at least six of whom were superintendents. They had formed committees and charged those committees with tasks to be completed before the next meeting. And they “adjourned to the parlors of the Weddell House for the purpose of social improvement, and that the members might the more easily become acquainted with one another.” One can almost smell the cigars.

The story of NEOEA is told in volumes of records stretching over the past 140 years. The earliest accounts are lost, but a few years later, the Association’s secretary, T. C. McCalmont, painstakingly reconstructed the organization’s earliest years. Here are few items from the NEOEA archives:

Within a few years after its founding, NEOTA’s books showed a carryover balance of $1.05 and a balance on hand of $30.25.

By 1907, the Association was observing NEOTA Day: an annual meeting in the fall, beginning on a Friday morning but extending through Saturday, usually in a large Cleveland hotel. Members from all around northeast Ohio would travel to Cleveland by rail. The Association then included 7,894 members, who paid annual dues of fifty cents.

Many of our retired members will remember attending the NEOTA Day held at Cleveland Public Auditorium in October 1965. One of the last of the centralized NEOTA Days, this one included presenters such as “Jungle Larry” Tetzlaff, and the entertainment included performances by the Cleveland Orchestra and Lorain’s Admiral King High School Band. In 1966, three regional meetings replaced the single centralized one; in the early seventies members returned to Public Auditorium for one last centralized NEOTA Day, and afterwards the present structure of NEOEA day developed, with workshops all over northeast Ohio.

In the 1960s, control of NEOTA’s internal affairs gradually shifted from administrators to teachers, and NEOTA became an employee organization. NEOTA played a prominent role in the unification of NEA, OEA, and local associations in the early 1970s, which brought about the UniServ system and the Legal Protection Plan for our members.

In 1966 the Association hired Bob Barkley as its first full-time Executive Secretary. After his promotion to another staff position with the Ohio Education Association, the late James Black, a Parma math teacher, served as interim Executive Secretary until Lowell E. Lutz’s hiring in 1971. By the time Lowell retired in 2000, the title had changed to “Executive Director,” and NEOEA remains the only NEA district affiliate employing a full-time Executive Director.

With a regular staff came a regular office: through the seventies, the eighties, and most of the nineties, the NEOTA/NEOEA officers were located in an office building on Pearl Road. In 1997 we moved to a larger site on West 130th Street, and to in 2008 to our present location in Garfield Heights.

Did you suspect the possibility of getting this cool bonus just for playing online? Many people have already done this and received a bonus even for a small deposit.

NEOTA incorporated as a not-for-profit Ohio corporation in 1974.

At its meeting on November 11, 1989, the NEOTA Representative Assembly amended our constitution and bylaws to change the organization’s name to its present form, changing “Teachers” to “Education” in recognition of our more diverse membership. Corporate documents were filed reflecting the new name.

In 2002, NEOEA’s Representative Assembly enacted new constitutional language, stating that “the purposes of the Association shall be: to serve as the voice for public education in northeastern Ohio; to advance the cause of education for all individuals; to promote professional improvement of its members; to promote recognition of the basic importance of the public educator in the learning process; to advance members’ interests and welfare; and to provide local association leaders with the tools to become more effective advocates for public education, members, and students.”

Gone in that amendment was the chilly reference to “the dissemination of correct educational ideas,” although clearly we still struggle today with those whose educational ideas are incorrect.